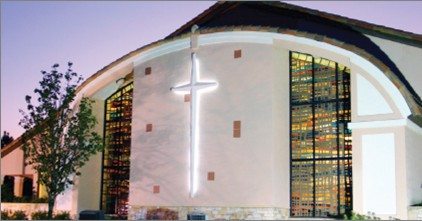 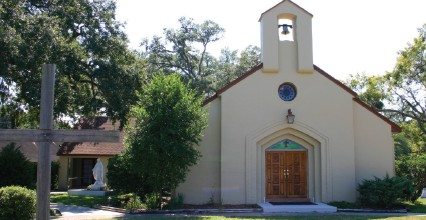 The Timucua Indians originally inhabited the Clay County area. This area was well known to the Spanish, who had built roads to their many missions, their forts and to Pensacola. The land changed ownership many times – from Indian to Spanish to English and back to Spanish again. Permanent settlement came after 1783 with the Spanish land grants. George I.F. Clarke’s land grant included the present site of Green Cove Springs. 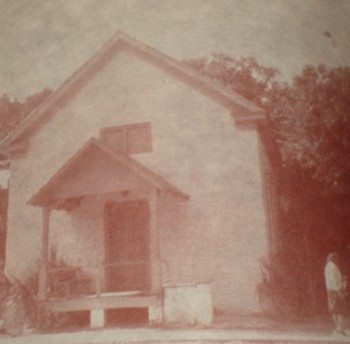 In 1872 Green Cove Springs became the county seat of Clay County the town, because of the reputed curative qualities of the mineral springs, became a Mecca for tourists and invalids. In this same year, Mr. and Mrs. Raphael B. Canova and their son, Philip, gathered all their possessions and began the long trip from St. Augustine to Green Cove Springs to make their new home. It was a difficult time for everyone; the Civil War was just over; there were very few houses in Green Cove Springs; the population was mostly poor; the famous Springs were there; even Mr. Porter’s mule and cart were there to do any hauling business, but there were no paved streets or hotels. A Bishop, Augustin Verot, had just been appointed by Pope Pius IX to be the first Bishop of the Diocese of St. Augustine, which included almost the whole State of Florida.

Bishop Verot granted permission to Raphael Canova, George Hanford and a few others to erect a mission in honor of the Sacred Heart on grounds that had been donated to the Diocese by a wealthy non-Catholic. The congregation of the mission was quite small in the early days of the mission. The priests from Immaculate Conception in Jacksonville visited the mission once or twice a month. A notice book, dating back to January 1893, reveals some interesting things about the mission. Father William Barry wrote on April 20, 1913, “28 parishioners had fulfilled their Easter duty while 7 had not.” Father Barry also took a census of the mission – 61 Catholics- men, women and children. The last entry in the notice book was made by Father J.J. Donnelly on August 24, 1929; he wrote “attendance at Mass – 15; offering $3.05.” 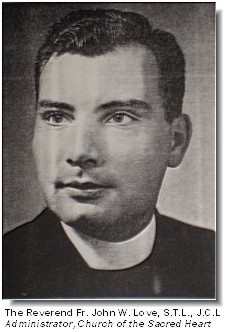 Alter the turn of the century. South Florida was being developed and tourism declined. Green Cove Springs remained a tiny town. The Church of the Sacred Heart was now a parish with a mission, St. Catherine’s Church in Orange Park. Father James P. Kerr served both churches in the forties. Almost overnight Green Cove Springs realized she was not large enough to take care of a new resident, the United States Navy. The Sixteenth Fleet was beginning to settle into the Naval Air Base at Lee Field, just outside of Green Cove Springs. Along with the town and its housing shortage, the Church of the Sacred Heart discovered it also needed more room. With the arrival of the fleet, Father John Love welcomed the many Catholic service families, and found he had to expand his Mass schedule to accommodate all of the Catholics in the area. Before the Naval Air Base was activated, Father Love offered one Mass on Sunday for the 12 to 24 people attending the little church that could seat 100. Often Father Love went to Lee Field and said Mass at the base.

By October 1945, it was necessary to have three Masses on Sunday. Priests from St. Paul’s in Jacksonville, the Cathedral in St. Augustine, and the Chaplains from the fleet helped Father Love.

Bishop Joseph P. Hurley looked at the Naval Base and at the little mission, and seeing the hazards for so many attending Mass in the small church, started making plans for a new larger parish church. One Sunday the choir loft caved in at the end of Mass, but no one was injured. The following Sunday, a portion of the porch gave way where many stood for Mass since the choir loft was gone. One of the pews broke down with the weight of nine sailors sitting on it. Father Love started celebrating Mass outdoors.

The generous manager of the Clay Theatre offered Father Love the use of the theatre. Sunday Masses increased from three to five, and even Midnight Mass was held there. Now St. Paul’s in Jacksonville assumed the responsibility for St. Catherine’s Mission in Orange Park, when Father Love’s duties multiplied with his large parish.

In the fall of 1946, for the first time in the history of the parish, two Sisters of St. Joseph from St. Paul’s in Jacksonville journeyed each week to Green Cove Springs to conduct Sunday school classes and direct the children’s choir. At this time the old church was being used as a parish hall and classroom.

On May 12, 1946, ground was broken by Father Love, Commodore H.H.J Benson and the parishioners for the greatly-needed new, larger church. Many hours of volunteer labor were given by the Navy personnel toward the building of the new church. The men of the fleet looked upon the little parish as their home, and the new church as a symbol of thanksgiving to God for their safe return from battle. The records show that the new church would be built “on land sold to the Diocese by Hendricks and/or Hanford at a nominal price,” this land being adjacent to the old church property.

The new church resembles the small parish churches of England and Normandy. The architect, Garry A. Boyle of Tampa, and the builder, Walter Butler Building Company of St. Paul, Minnesota, joined together in placing this magnificently simple building into a setting of rustic beauty, surrounded by large oak, walnut and magnolia trees. The church is placed diagonally on a corner site with curved walks leading from the city sidewalks to its graceful entrance.

The sanctuary was constructed of a great brick arch, reinforced with steel and concrete and surrounded on three sides by heavy walls of concrete blocks. The sanctuary’s low wooden beam ceiling serves as the baldachino or canopy. 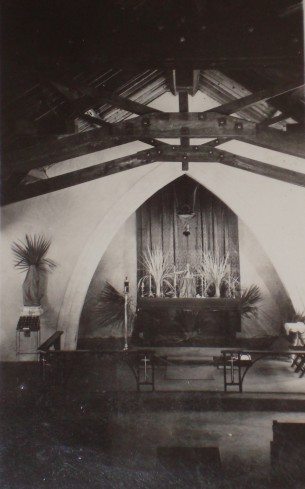 The altar, made locally of walnut wood, was placed under the arch and rests on a step or predella. The simplicity in design of this church eliminated the side altars, but two beautiful old statues of the Sacred Heart and the Blessed Mother were placed on shelves on either side of the altar. A communion rail enclosed only the main altar, but an altar rail was extended into the body of tile church.

The ancient bell that called the first Catholics to services was found intact and was installed in the belfry of the new church. An iron Celtic cross was mounted on top of the belfry to give a mission-like appearance to the building.

A beautiful chapel, dedicated to the Blessed Mother under the title of “The Seat of Wisdom” is situated near the main entrance of the church.

Sacristies were added at the rear of the sanctuary, providing rooms for the priests and servers to vest for Mass.

From inside one can see the wooden trusses hit support the roof, the trusses were left bare and stained a dark color, forming a beamed ceiling for the church. The roof outside was covered with red asphalt shingles that are capable of withstanding any weather in the area. The windows were designed for allowing complete ventilation. The lighting fixtures are handmade from stained cedar wood, but scientifically designed to prevent glare and eyestrain.
The church rests on a double-depth concrete foundation to prevent cracking from sag or settling. The “L-shaped” church seats 350 people. A side-room or loggia, which provides additional seating space for 100 people, can be closed off to provide a place for meetings or religious classes.

On June 15, 1947, the Auxiliary Bishop of St. Augustine, Bishop Thomas J. McDonough, joined Father Love, the priests of the Diocese, and parishioners in celebrating a Pontifical Mass for the formal dedication of the new Church of the Sacred Heart. At this time it was noted that almost every pastor and most of the assistants in the Diocese has served in Sacred Heart Parish, and that some of these priests were later raised to the dignity of the Episcopacy. The Rev. Fathers William J. Kenny and Patrick Barry became Bishops of St. Augustine, Father Maurice P. Foley because Bishop of Jaro in the Philippines and Father Thomas J. McDonough was the Auxiliary Bishop of St. Augustine.

With the passing of time and the growth of the congregation, it was necessary to build a parish hall. The parish hall stands on the original site where the old mission was, built over a century ago. The Most Reverend Bishop Paul F. Tanner of St. Augustine presided over the dedication of the hall in 1968.

A Jubilee Mass of Thanksgiving was celebrated at noon on December 7, 1974 by Bishop Paul F. Tanner, Father Luke McLoughlin and the priests of the Diocese of St. Augustine.

Fr. Donal Sullivan, a native of Ireland, was appointed pastor of Sacred Heart in 1994 and the Church of the Sacred Heart reached another milestone – in 1999, celebrating 125 years of serving God and His people in the Green Cove Springs area.

As Sacred Heart looked forward to the new Millennium and to the challenges of more growth in our area, these challenges were asking us to build a new sanctuary which would accommodate the growing Catholic population. In 1999, the work began to build this new sanctuary. The new Sacred Heart located at 7190 State Highway 17 in Fleming Island was built and on May 13, 2001 the dedication was presided over by Bishop John J. Snyder. 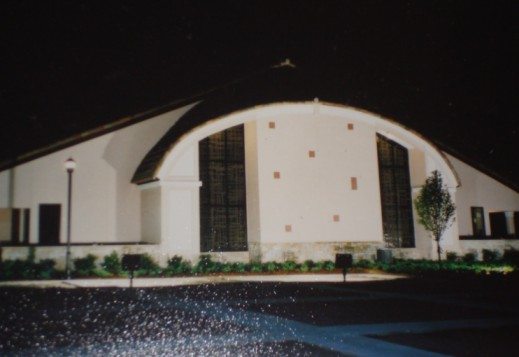 Looking back on the first one hundred and thirty five plus years, this church can be proud of the part it has played in the history of both the diocese and the State of Florida. With the blessing of God and the prayers of many friends, the Church of the Sacred Heart will be ready to take the first step forward into its second century.

Today is a day in which we celebrate joyfully the achievements of our ancestors. May God bless and reward those who have gone before us in our parish! May He fill us with faith and courage as we continue in the faith.

FLEMING ISLAND MASS SCHEDULE
Weekend:
Saturday Vigil: English 5:30pm/Spanish 7:30pm
Sunday: 8:00am, 10:30am
Weekdays: Monday through Friday 8:00am
Holy Days of Obligation
8:00am and 7:00pm
Sacrament of Reconciliation
Saturday:
English 4:30 to 5:15pm/Spanish 6:30 to 7:25 pm
or by appointment
Exposition of the Blessed Sacrament:
First Friday of the month after the 8:00am mass in Fleming Island and at 7:30pm in Green Cove Springs